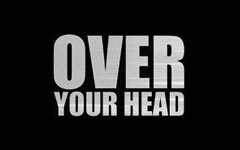 Summer 1995
It was a simple idea: film a car chase. Oh yeah - one other criteria: three separate cars being chased by a harrier jet, and all three drivers had to die.

Not one to turn down a challenge, Marc Gordon, Jim Akiba and myself went ahead and began planning. I worked up a cheesy script which involved three guys discovering a secret military base housing a UFO within a mall. The evil military dispatches a harrier to destroy the trespassers.

It should be noted that in the above script there are differences from the final version of the film. We did not use any footage from True Lies, and the ending is different. But it shows the planning that went into the film, even though we had a few problems.

First off, how to do it? The plan called for extensive visual effects, none of which were possible when filming started in June, 1995. Nonetheless, I was confident that by the time I got to the editing stage, I would have the technology to do the visual effects. I was half-right.

Principle photography was hampered by the fact that no mall in the Newton/Brookline area (in Massachusetts) would let us film there. In fact, we even tried renegade filmmaking, but found that it didn't work, and the Mall at Chestnut Hill promptly banned us from filming. (But not before shooting one "exciting" outtake.) Not to be deterred, we came up with a backup plan: Beaver Country Day School would be the replacement for the mall. Our high-school alma mater seemed to be a reasonable substitute, and we even managed to get our Headmaster, Peter Hutton, to act in the film as the "Evil Man".

So we started filming principle photography, and it went pretty well. Since we only had 3 cars to film from, we would just drive from location to location, with the camera switching cars on occasion. While filming was going on, Marc Gordon was building the miniatures of BCDS and the Harvard Bridge (Mass Ave, for you locals) for filming.

Lastly, the explosions themselves needed to be filmed. Unfortunately, the summer was over - and we all had to return to our respective colleges. The film would sit in limbo for nearly one year - we still didn't have the ability to edit it and we still were uncertain of the outcome of the visual effects!

Summer 1996
So we were able to meet up once again for the summer. Except this summer was to be different: I got a new Pentium 166 with a MiroVideo DC20 video-capture card. We digitized all of the footage into the computer, and with a little bit (okay, a LOT) of time, an edited version of the film was done. But there were no visual effects, and no explosions.

Jim Akiba and Marc Gordon were in charge of the pyrotechnics. Marc built a "stunt" bridge out of foam-core, and we positioned it in the approximate angle of the background plate - and blew up the bridge!

A lot of CGI work needed to be done. Marc Gordon modeled and textured a Harrier aircraft in 3D Studio R4, and we animated and composited it with the various shots.

After a while, things looked pretty good, and a trailer for the film was cut, based on the currently playing trailers for Independence Day. (Was this prophetic of Labor Day?) Soon enough, a rough version of the film was completed. Titles were created and added, and music was temp tracked into the film (appropriately enough, with True Lies for the most part). Interestingly, the opening titles were all fake for the first couple of months - but in the end I decided to make it all bona fide and accurate.

Winter 1997
We realized for one of the shots we needed Lorne running from the car before it exploded. What we ended up doing was shooting some footage of Lorne in a parking lot, and compositing him into the previously existing miniature shot. More is explained below.

Now the film was officially done - and I vowed never to touch it again. Unfortunately, I was wrong.

In the end, the miniature car was rotoscoped out (the miniature building was removed) and morphed with the real car into a composite of the background plate. Sounds easy? Didn't think so - and it wasn't easy. But it worked. Unfortunately, the resulting shot was not only neat to see, but laughable. It had to do with the fact that when the car hit the stairs, it actually stops - then continues into the building. All said, a very interesting shot.

Destruction of the Bridge
We filmed a background plate of the missile slamming into the bridge. No missile, and no explosion. We filmed a shot of the stunt-bridge blowing up. After compositing the two, some digital chunks of concrete were added, and a missile and smoke trail were also added. A nice little inside joke was that the chunk of concrete which hits the camera has "250 Smoots" written on it. For those of you unfamiliar with the idea of the "Smoots", check out this webpage.

Skidding To A Halt
In the original version of the film, this shot took a miniature and composited a digital matte painting of Boston in the background, to sell the shot. In the new "Special Edition" version, the skyline has been enhanced, and the water actually moves. Additionally, a zoom/pan was added, enhancing the editing of the scene.

Smashing Cars
Similar in concept to the above "Skidding" shot, the miniature was digitally composited onto a background plate, with matte-painting extensions to the bridge and supports.

Lorne Running as the Bridge Explodes
Similar in concept to the first bridge explosion, this one needed Lorne composited into the shot. So we filmed him from an elevated angle in an Industrial Park in Newton, and viola!

So for some bizarre reason (actually, it's not so bizarre), I decided to tackle Over Your Head once more - this time over 3 years from when we began filming. My experience with Adobe After Effects had blossomed, and I felt I could accomplish better compositing than what I had achieved with Adobe Premiere. I was right. Also, utilizing After Effects' Motion Tracking capability, I was able to apply the original camera shake to the harrier shots - locking them into the picture. Cleaning up the editing and tightening it all, as well as adding newer, sleeker titles was all part of the deal.

This version involved a complete overhaul of the film. It was captured in DV from the original 8mm source material. All of the visual effects were redone, and some new shots were even inserted after a location shoot from the top of the Prudential building in Boston. The compositing, done in After Effects, was much cleaner this time around, and I even got a chance to create a newly rendered version of the "left turn" shot, where the harrier flies around the Hancock building.

I know it's absurd that this project has taken this long. But the only major changes at this point involved the sound mix. A friend of mine, Scott Selfon, was going to write the score based on a cheesy Bond-esque pop song I wrote (for the end credits). Unfortuantely, his job prevented him from dedicating any time to this project, and in the end, I had some rough synth sketches that I created - but none of them ended up in the final film, which uses the temp score.

Additionally, I modified the Hancock building shot; the plane looked weird turning behind the building, so I put it in front. That allowed me to make a very nice reflective rendering effect on the building itself, which I am quite happy with.