Escape From CMU had its roots formed on a quiet saturday in December 1996. After watching both Escape From New York and Escape From LA back to back, it was observed that they are basically the same movie. A friend of mine, Carlos Moreno, who had seen my other film Labor Day suggested the idea for a parody which took place at Carnegie Mellon.

From there, the ideas grew. Over winter break, I wrote a draft of a screenplay. Upon returning to school in January, I got more ideas from a friend of mine, Brendan Dunham, and integrated them into the next two drafts. A final fourth draft was completed on February 9, 1997. Now, the next stage was to come.

I found a faculty sponsor (John Sturgeon) in the Art Department, and wrote up a proposal for an independent project. It was approved, and I now had to cast for the film. A lot of my friends knew about the project, and had expressed an interest either in front of the camera, or behind.

After my first production meeting, I knew things were going to be big. How big, I didn't realize until our first night of shooting. We were in Kirr Commons, filming a scene between Jason Pickett (Pliskin) and Kris Lavery (Man). We had lights, microphones, costumes, makeup, and everything else that I had never used before in making a student film. And best of all, I had people running different things. As the director, all I had to do was block the scene with the actors, have them rehearse it a couple of times, and then call out "Action!". It was a unique but wonderful experience for me.

The rest of the shoot went more or less without incident. We filmed sporatically in the evenings over the next month (we were at the whim of Jason's schedule) and whenever we were done shooting for the night, I would take the footage and digitize the scene into the computer and have an edited version. So by the time we were done with principle photography, all that was left was to do sound and visual effects. 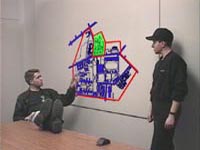 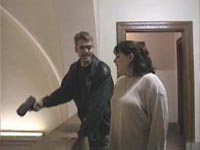 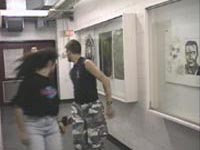 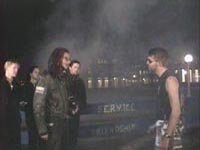 Visual effects mainly consisted of composite work, with some 3D models and physical miniatures. Mike Natale and I built a scale model of The Fence from cardboard and beer cans. It was painted black, primed, and then lit on fire. The fire was then composited on top of the real fence, and behind Jason. 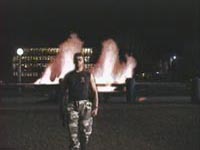 Another key vfx shot involved the SafeWalk Hummer. In this shot we used crew member Scott Ziolko as the eyeline marker as he ran across the screen. In post-production, a 3D animation of a computer generated Hummer completed the effect. 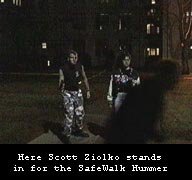 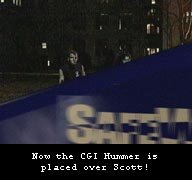 Some other visual effects included some digital matte paintings and modifications, as well as a digital "stunt double" falling off of Hunt Library for a key action scene at the end of the film. 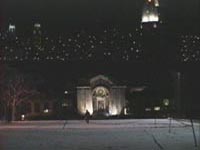 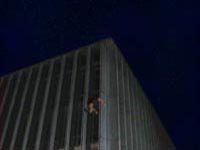 After all was said and done, the film was very well received at the Student Film Festival in April. It was voted second most popular film, just after my other entry, Labor Day

In November 1998, I had the opportunity to interview John Carpenter about his film Vampires for my website, SoundtrackNet. This gave me the chance to give him the videotape of Escape From CMU for his enjoyment.  While I have not heard back from him regarding this tape, I assume he has watched it and (since he hasn't sued) must have found it somewhat amusing.

Now t he "Special Edition" of Escape From CMU has been completed. The only real difference was some tightening up of the editing, remastering the film from the original Hi8 sources directly to MiniDV for lossless quality in editing, and some new ADR work has been done with some of the original cast members.

One new visual effect in particular has been fixed.  The original effect of Air Force One being shot down was never up to snuff, in my mind, and lacked some real visual imact (i.e. debris, etc.) Now, however, that shot has been redone and is far superior to the original (in my opinion).